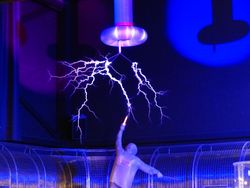 Dr. Strangeshock (Or: How I learned to stop worrying about static electricity)

We’ve had a few people, over the years, contact us to say their Simpro bin lifter is giving them electric shocks. Some were worried the machine might be faulty, or maybe a wire was loose somewhere.

Well, please don’t worry. The machine isn't faulty, the shocks aren’t dangerous, and the problem is easy to solve. As you might have guessed, it’s just static electricity.

Static shocks are caused by the sudden correction of an accumulated surplus or deficit of electrons on your body and/or on objects around you.

Every object is made up of atoms, which in their settled state, each possess a certain number of electrons. But when people and objects move around, their atoms often lose or gain some electrons. When this happens, pressure builds for the electrons to reshuffle and balance themselves out – nature abhors atoms with the wrong number of electrons much like it abhors a vacuum.

Most of the time, this redistribution happens all the time without anyone being any the wiser.

But sometimes, electrons can find it hard to move. For instance, if an object is insulated from its surroundings by non-conductive materials – rubber shoes or tyres, nylon clothing, dry air – the electron imbalance can build up. It then becomes a form of stored energy, like a large and not-very-efficient battery.

When the insulation is broken (for instance by touching another object) millions of electrons flow across the contact point in search of electron-deprived atoms. And you get a small electric shock.

Can these shocks be dangerous?

No. Because objects in day-to-day life are never completely insulated from their surroundings, it is not normally possible for the electron imbalance to reach a dangerous level. The electrons will always find a way to rebalance before the stored energy gets too high; through the air if need be.

Is it me or my machine causing the problem?

If you wear rubber-soled shoes or nylon clothing, it is very likely that static charges will build up on your person as you move around, causing a static shock on contact with any grounded object – including machinery.

On the other hand, like most machines, Simpro bin lifters can be vulnerable to building up a static charge since they have moving parts and sit on rubber tyres. While mains-powered machines will automatically balance static through the ‘earth’ wire in the power lead, battery-powered machines that are not plugged in have no clear discharge route – especially if the air is dry.

This means they can cause static shocks, even when the operator themselves is well ‘grounded’.

Right. So how do I stop it from happening?

That depends on what’s causing it. If you’re the ‘problem’ you might need to invest in shoes with conductive leather soles, or cotton clothing; or you can just wear gloves.

If the ‘problem’ is your battery-powered bin lifter (or another machine) the easiest solution is to ground it. That is, provide a path for electrons to naturally redistribute themselves by travelling to and from the ground beneath the machine.

This is a simple task: just attach a small wire or metal chain to the frame of the machine, in such a way that one end drags or rests on the ground. Et voila – no more static shocks!